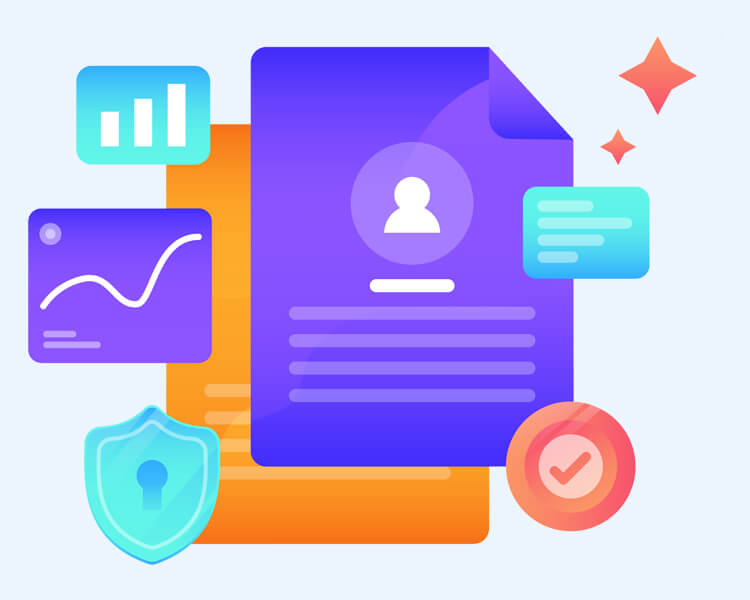 We collect certain data from you directly, like information you enter yourself and data from third-party platforms you connect with like LinkedIn. We also collect some data automatically, like information about your device and what parts of our Services you interact with or spend time using, for technical display reasons and a better user experrience.

2. Data You Provide to Us

We may collect different data from or about you depending on how you use the Services. Below are some examples to help you better understand the data we collect.

3. How We Get Data About You

We use tools like cookies, analytics services. Some of these tools offer you the ability to opt out of data collection.

4. What We Use Your Data For

5. Your Choices About the Use of Your Data

You can choose not to provide certain data to us, but you may not be able to use certain features of the Services.

The subject matter of these GTC is the legal relationship between CSS on the one hand and regular users, jobseekers, companies seeking to fill vacancies and recruitment agencies using its mobile application and partner platforms on the other hand (hereinafter the “User”) with regard to all the products and services offered by CSS. These GTC shall apply with regard to each and every use of the products and services offered by CSS (in particular the use of the mobile app called Crowlr).

Consent to these GTC shall be given by signing a written cooperation agreement or a written offer, by explicit or implied acceptance of an order confirmation, by payment of an invoice or by use of the products and services offered by CSS.

Integral parts of the contract are (where they exist in particular in a given case) (i) the written cooperation agreement concluded between CSS and the User, (ii) the user-specific written offer, (iii) the written order confirmation, (iv) these GTC and (v) the product of CSS applicable at the time a product or service is used. In the case of ambiguities or contradictions between the individual contract documents, the above stated order of priority shall apply. With regard to data protection, the Privacy Policy in force at any given time on the respective platform of CSS shall apply.

The User selects the services to be performed by CSS among the services on offer at the time of his use. The current service offer is described on the respective websites of CSS.

For companies seeking to fill vacancies and recruitment agencies, CSS in particular offers the services “Scenario Account” and “IM Quota”. For the scope of services, the product descriptions published on the websites of CSS at the time of use of the service shall apply.

In the case of a Scenario Account, the User has, during the fixed contract term, an agreed number of Scenario available to it. The User is entitled, when removing a Scenario, to directly add a new Scenario. A Scenario limit of 8 means, e.g., that the User cannot create more than 8 Scenario.

In the case of an IM Quota, the User purchases a quantity of IM to be used with the Crowlr application when contacting Users. IM are not saved for future purposes on any of the platforms of CSS. The duration of the quota as stipulated in the respective product description or in another integral part of the contract shall apply. Unused IM shall expire and shall not be reimbursed.

By inputting their data, users declare their consent to have their respective profiles made available on the platforms of CSS as well as the partner platforms for companies seeking to fill vacancies and recruitment agencies. The non-publication or the defective publication of a profile does not give rise to any claims against CSS.

The User bears the sole responsibility for the contents of its profile. The user represents and warrants that all information contained therein is correct and up-to-date. The mobile application Crowlr from CSS can only be used to publish profiles that comply with all statutory requirements. Profiles shall not violate the intellectual property, privacy or other rights of third parties (cf. Privacy Policy). The User undertakes not to publish any illegal content, in particular content of a racist, pornographic or personally injurious nature, via CSS. Inadmissible is in particular the following content:

Users warrant that they will only use the platforms of CSS and its partner platforms in full compliance with all applicable statutory requirements. Companies, recruitment agencies and employment services firms warrant in particular, that they are in possession of a valid recruitment or hiring of services permit and undertake to provide CSS with a copy thereof on first request.

There is no early termination of an agreement concluded for a fixed term or a minimum term. In particular, if profiles or data are deleted early, payment is still owed in full and the User has no right to demand reimbursement of payments already made. The same applies in the event where CSS must delete profiles or block users on the basis of the present GTC or other integral parts of the contract.

CSS is not obligated, following cessation of the Agreement, to retain any data or documents submitted to it, or to return these to the User.

The payment obligations of the User shall commence upon conclusion of contract, without deductions, provided other payment terms have not been explicitly agreed. Where the User is in default in regard to payment of invoices, CSS shall in addition be entitled to suspend its services without prior notice and to block the User or his access to further services of CSS.

CSS performs its services professionally and diligently. CSS is not, however, in a position to guarantee that its services are available without interruption or free of errors. CSS shall in particular not be liable for any interruptions of service and/or technical difficulties and the effects thereof. The profiles accessible on the platforms of CSS originate from the respective Users and CSS assumes no responsibility for the accuracy or completeness of this information.

CSS endeavors to prevent any unauthorized use by third parties of the data published on its platforms. All liability of CSS in the case of unauthorized use by third parties is, however, explicitly excluded. CSS assumes no responsibility for the success of a given profile. In any event, all liability on the part of CSS is limited to illegal intent or gross negligence. Any liability for indirect damages or consequential damages is excluded.

The User is responsible for the legality, accuracy and completeness of the content made available or entered for publication on the platforms of CSS and its partner platforms. The User is responsible for the careful and confidential safekeeping of his user information (in particular user name and passwords) and for all activities carried out through his or her account. The User is liable vis-à-vis CSS irrespective of any fault, for all damages and costs incurred as a result of breaches of these GTC or other integral parts of the contract and shall indemnify CSS for any and all claims asserted by third parties against CSS as a result of the User’s use of the platforms of CSS and its partner platforms. Such damages for which compensation shall be owed include reasonable legal fees.

The place of performance for all services to be performed by CSS is the business domicile of CSS.

CSS reserves the right to amend these GTC at any time. Between the User and CSS, the version of these GTC currently published on the websites of CSS shall apply. CSS will inform the User in advance and on its websites or by other such suitable means, as to any amendments to these GTC.

CSS reserves the right to change or terminate, in part or in full, its service offer at any time, without prior warning or giving reasons for doing so. Such changes or suspension of the service offer shall not entitle the User to assert any claims against CSS.

These GTC and the other contract components, as well as any disputes which arise from or in connection with the contract relationship between CSS and the User, shall be exclusively governed by the substantive laws of Switzerland.

The ordinary courts at the place of registered office of CSS shall have exclusive jurisdiction, whereby CSS shall also be entitled to seek redress against the User at the latter’s place of domicile.